harry potter and the half blood prince 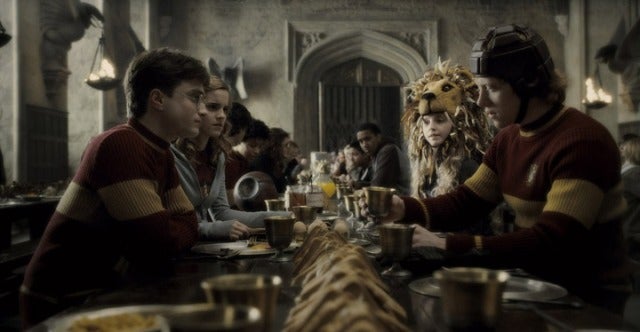 headed to mangalore yesterday for the long waited movie, riding the bus alone ain't that bad of an exprience :)) the movie??

without a doubt, i think everyone should carve some time out to watch this movie. it was magically well done by director david yates, great acting by its casts and don't even get me started on the CGI effects.

my favourite scenes involved the cave, where

not forgetting, how the friendship btween the three was beautifully shown at the stairway scene, when hermione depended on harry for a shoulder to cry on (u deserved the bird attacks won-won!! ). and how in midst of all the tension, yates managed to show the humourous side of the story very nicely too. who would also imagine that THE great draco malfoy had such a sensitive side of him.

i went out of the cinema, grinning widely eventhough a twinge of dissapointment was felt. as i've told everyone, they just haddd toooo cut off the last parts of the book. i was looking forward for the funeral and the end battle which was MIA. the ending was rather abrupt too..

the movie was superb!! but the ending sucked just a very bit~

i stoned during HP,tak paham la weyh (dts because i ddnt see da other series hehe)

hanaa (:
melaka, Malaysia
a malaysian medical student who dreams of baking walnut brownies all day.any of you got a problem with that?